So far I've reviewed about 15 edit suggestions, 3 of these I rejected. All for the same reason. Deviating from the OP's intent.

This would be a fine edit from the OP, but not from another user. THe comment part is okay (the OP replied in comments with "a simple reason will suffice, but I don't think it's too broad"), but the "to address some of the comments..." is not okay. It's basically pretending to be the OP and doing something under his name. 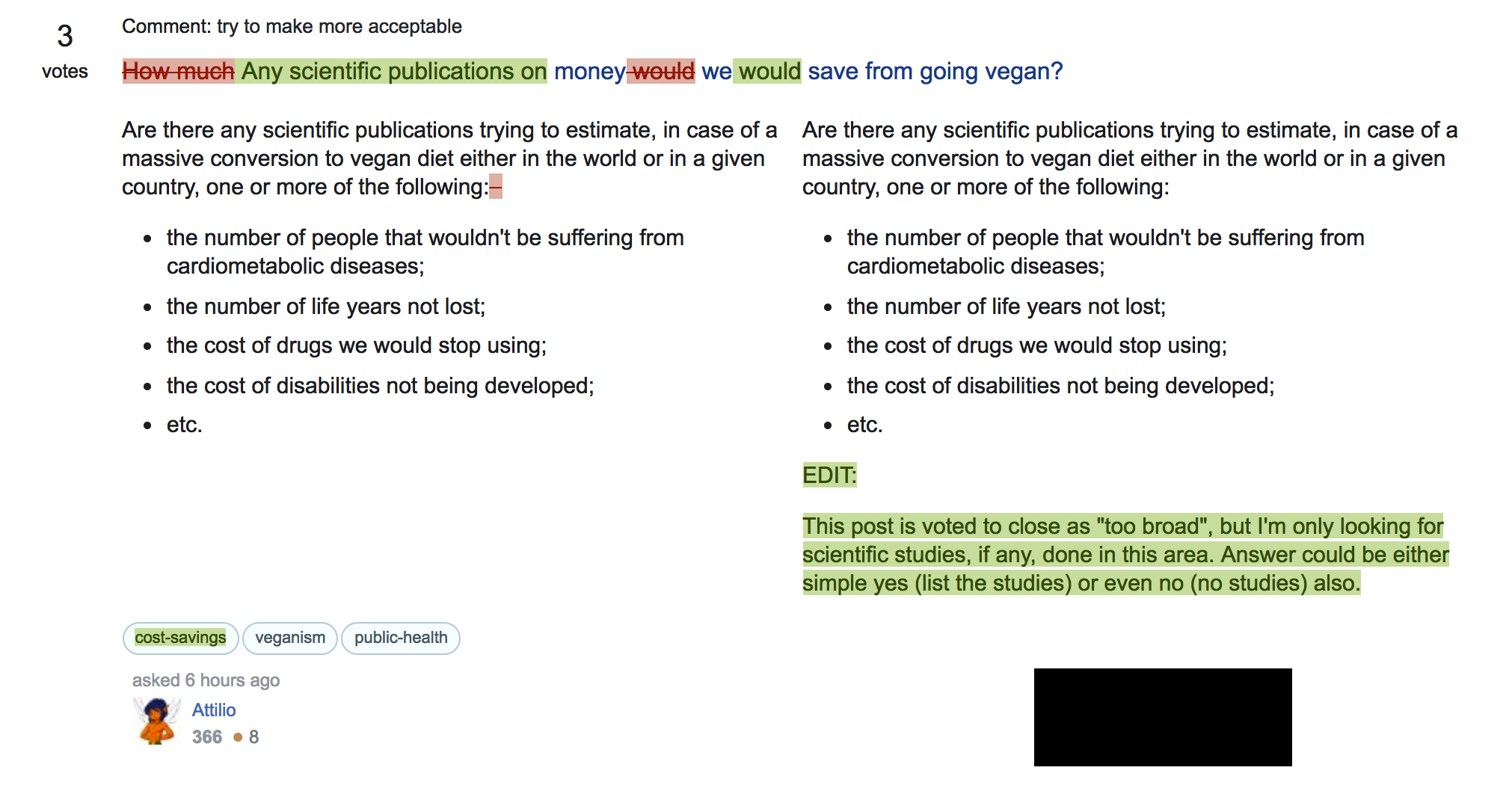 Also note that both of these questions were in the process of being closed, but that doesn't really matter. It explains the motivations, but it's still not allowed.

The editor also left a comment saying "@AlexanderRossa I hope you appreciate the image I'm adding!". (just noting this, it doesn't really make much of a difference)

This is a fun image, but there's three problems. First, it's completely unrelated to the question part, i.e. the "how can I do this" part. It's only tangential to the subject matter anyway.

Third, like the earlier examples, it simply deviates from the original question. If the OP added it, I'd edit it out due to the first two reasons though.

Why is this a big deal? Because we currently have 4 users with the ability to review suggested edits. (almost 5!) Each edit takes at least 2 people to review, unless one person clicks the "improve edit" or "reject and edit" button. Yes, the OP can approve it and only one edit is required, but failing that...

Let's not waste the time of the few reviewers we have, eh?

I disagree with your assessment ("unwarranted" and "drastic") on two of my edit suggestions for following reasons:

I simply added the OP's comment from below the post into the question itself which is exactly what SE rule #2 says.

OP already says "Are there any scientific publications..." in the very first line. Yet the title ("How much money would we save...") makes it sound like an opinion-based question and too broad so I just tried put that into the question title (see rule #1 above, clarify meaning of the post).

Before rejecting an edit or voting to close a question, think of this situation:

If a new user joins a site and doesn't know all the SE rules and then a few high-rep users try to close down the question as fast as they can without trying to improve the post and make it more acceptable, new users will stop participating on this site.

Our goal in beta should be to edit and make posts more acceptable. SE rules are not meant to make life difficult for users!

Not the answer you're looking for? Browse other questions tagged discussion editing .

8
Should we allow questions on defining what is/isn't vegetarian?
4
Are questions relating to the debate of whether people should go veg*n (e.g. about animal suffering) on-topic?
10
How can I best convince people to come join the site in a reddit post?
0
Let's clean up our tags
4
Please do not answer in the comments
3
Do you like the idea of an [unresolved] tag on Meta?