A reminder to those with 500+ reputation: please remember your close/reopen votes!

Vegetarianism(/Veganism) SE has just entered public beta - yay! - which means a lot of the reputation thresholds for site privileges have changed. Specifically, the one whose threshold has changed the most is the ability to vote to close and reopen other people's posts.

Up until this point, everyone has been able to cast close/reopen votes. Every single user, even those totally new to SE with just 1 reputation point. Now that privilege has suddenly been restricted only to users with 500+ reputation - currently 16 of us. Of course this number (of users able to VTC/VTRO) will grow rapidly, but it will take a long long time to become quite as large as it was yesterday.

May I remind all such users to please continue using these powers when necessary. Now that there are fewer of us, we'll probably each need to cast more votes than we did before. Please remember to check the Close and Reopen review queues regularly, and be conscientious about voting to close new questions if they shouldn't be here and voting to reopen closed questions which have been substantially improved or shouldn't have been closed in the first place.

In addition to the users who can VTC, all users with 15 or more rep can flag for closure.

This will put the post in the Close Votes queue, where more users with the Close privilege will be able to see that it needs to be closed. 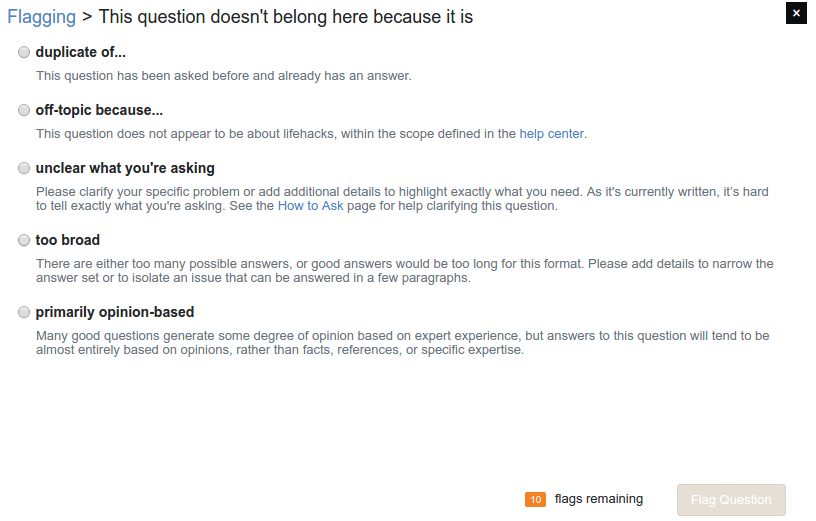 Not the answer you're looking for? Browse other questions tagged discussion close-votes .

12
Define on-topic and off-topic reasons in the help center
10
How can I best convince people to come join the site in a reddit post?
3
Is it time for a new questions feed into chat?